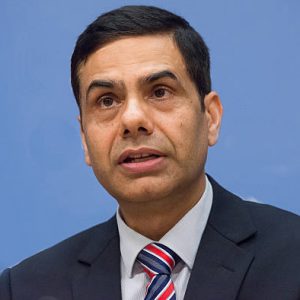 His Excellency Mr. Gyan Chandra Acharya assumed his responsibilities as Ambassador Extraordinary and Plenipotentiary of Nepal to the United Kingdom on 23 February 2022 and presented his credentials to Her Majesty the Queen Elizabeth II on 31 March 2022. Before taking over as the Ambassador of Nepal to the UK, he served as the Economic Advisor to the Prime Minister of Nepal from August 2017 to February 2018.

He led and participated in many bilateral, regional, and international meetings. He was also involved with a number of national and regional institutions related to foreign policy, regional and global issues, sustainable development, environment and climate change and vulnerable countries.

H.E. Mr. Acharya was born in 1960. He is married to Mrs. Sunita Acharya, and they have a son and a daughter.