Nepal and Ireland established diplomatic relations on 19 August 1999. The total trade between Nepal and Ireland is worth 189 million Nepalese rupees in 2016 and the trade is heavily in Ireland’s favor. Nepal’s exports to this country stand at around 12 million only. A considerable number of tourists from Ireland visit Nepal every year. Forty-four mountaineers received permission for mountaineering in 2015. There have been investments of worth 738 million rupees in seven projects from Ireland up to the year 2070 B.S.

Ireland’s embassy in New Delhi is concurrently accredited to Nepal while Embassy of Nepal in London looks after Nepal’s relations with Ireland. Ambassador of Nepal to Ireland, His Excellency Dr. Durga Bahadur Subedi presented his letters of Credence on 27 April 2017 to His Excellency Michael D. Higgins, President of Ireland amidst a special ceremony held at the Presidential Palace at Dublin. 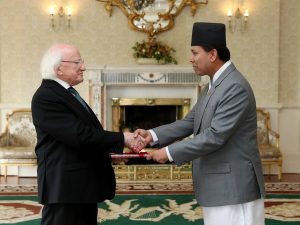 Celtic tribes arrived on the island between 600-150 B.C. Invasions by Norsemen that began in the late 8th century was finally ended when King Brian BORU defeated the Danes in 1014. English invasions began in the 12th century and set off more than seven centuries of Anglo-Irish struggle marked by fierce rebellions and harsh repressions. A failed 1916 Easter Monday Rebellion touched off several years of guerrilla warfare that in 1921 resulted in independence from the UK for 26 southern counties; six northern (Ulster) counties remained part of the UK. In 1949, Ireland withdrew from the British Commonwealth; it joined the European Community in 1973. Irish governments have sought the peaceful unification of Ireland and have cooperated with Britain against terrorist groups. A peace settlement for Northern Ireland is gradually being implemented despite some difficulties. In 2006, the Irish and British governments developed and began to implement the St. Andrews Agreement, building on the Good Friday Agreement approved in 1998.

Ireland is a small, modern, trade-dependent economy. GDP growth averaged 6% in 1995-2007, but economic activity dropped sharply in 2008 and Ireland entered into a recession for the first time in more than a decade with the onset of the world financial crisis and subsequent severe slowdown in the property and construction markets. Agriculture, once the most important sector, is now dwarfed by industry and services. Although the export sector, dominated by foreign multinationals, remains a key component of Ireland’s economy, construction most recently fueled economic growth along with strong consumer spending and business investment. Property prices rose more rapidly in Ireland in the decade up to 2006 than in any other developed world economy. Per capita GDP also surged during Ireland’s high-growth years, and in 2007 surpassed that of the United States. The Irish Government has implemented a series of national economic programs designed to curb price and wage inflation, invest in infrastructure, increase labor force skills, and promote foreign investment. In 2008, the COWEN government moved to guarantee all bank deposits, recapitalize the banking system, and establish partly-public venture capital funds in response to the country’s economic downturn. Ireland joined in circulating the euro on 1 January 2002 along with 11 other EU nations.

It has parliamentary republican system of Government. It became independent from UK on 6 December 1921. With its capital in Dublin, it has 26 counties and three cities.

The Irish foreign policy focuses on reconciliation and cooperation on the Island of the Ireland, the provision of support for Irish citizens travelling living and working abroad, the growing engagement with Irish diaspora and the promotion of the Irish culture. Ireland supports for a fairer, more just, more secure and more sustainable world through development programs, human rights policies, peacekeeping disarmaments, and security policies as well as growing engagement with emerging global issues including climate change. It also considers the role in the European Union and the United Nations in amplifying Ireland’s voice and extending its influence.